I attended the UK Network Operators' Forum (UKNOF) #34, held in Manchester on 21 April 2016. As part of this event, Stuart Grace from BBC R&D gave a presentation on IP Networks in the TV Studio, discussing how they use RTP for media transport, including use of the RFC 4175 uncompressed video format we developed in UltraGrid. 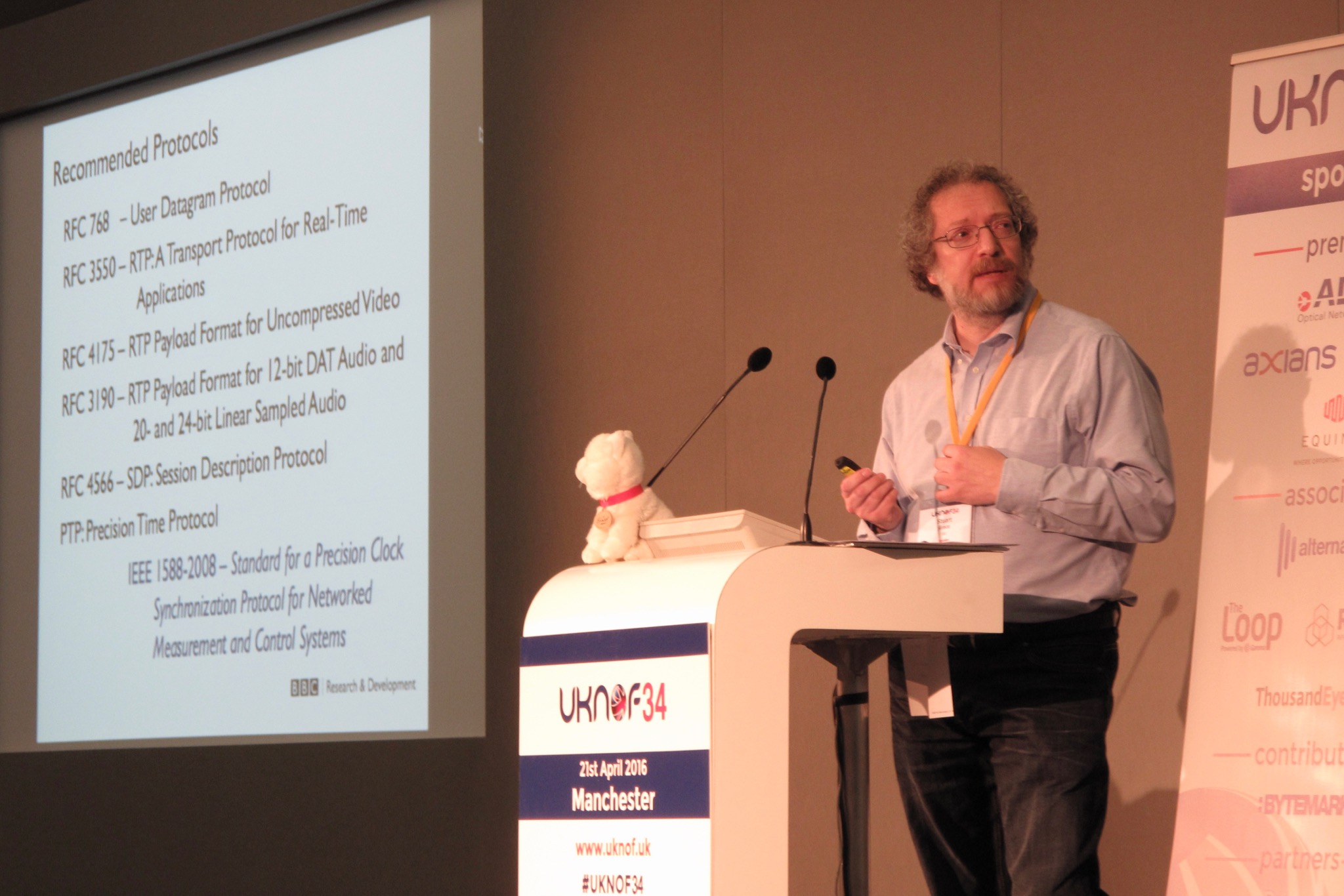 In the decade since the UltraGrid project ended, end-system and network performance has increased to the point where it is becoming commercially feasible to move uncompressed video transport within TV studios and production networks from HD-SDI links onto IP-based networks. BBC R&D have been investigating use of SMPTE 2022-6 RTP-based transport and native RTP-based media, in particular using the RTP Payload Format for uncompressed video we developed.

The key drivers for this transition are cost and flexibility. The cost argument is straight-forward. Even at the 10- or 100-Gbps rates needed to deliver uncompressed 4k or 8k video, IP-based Ethernet and fibre links, and IP routers, are cheaper to deploy than dedicated video hardware. As usual, the market for commodity hardware achieves economics of scale that are not possible with specialist equipment, and these savings are likely to increase over time.

The flexibility argument is more subtle. Irrespective of the transport, uncompressed HD, 4k, or 8k video is not going to be delivered over the commodity network anytime soon. IP networks can transport such video, with very high quality, but need careful provisioning and management in order to do so. Multi-gigabit per second UDP flows, with strict loss, latency, and jitter requirements, must be treated carefully, and run over dedicated networks, to avoid disruption by, and to, other traffic. In particular, these flows cannot be congestion controlled, so they cannot run over unmanaged networks. Where then is the benefit in flexibility from running the traffic over IP? Firstly, flexibility in processing: streams are transported in a way that exposes metadata about the frames and content, making it easier to manipulate and compose streams at different places in the network, giving flexibility in where and what video processing occurs. Secondly, there is increased flexibility in switching, since IP flows, even at extremely high rates, can more readily traverse commercially available, if specially provisioned, wide-area paths than can flows using dedicated video links.

Taken together, IP-based transport for uncompressed video within TV production facilities has the potential to offer numerous benefits, and I'm pleased to see the format we developed in UltraGrid is starting to be taken up by industry in this space.