The Web We Weave: Untangling the Social Graph of the IETF

We attempted to answer these questions in a paper that Prashant Khare recently presented at the International Conference on Web and Social Media (ICWSM).

In that paper, we studied more than 2 million email messages, sent by almost 45 thousand participants in the Internet Engineering Task Force (IETF), over a twenty year period. The IETF is one of the leading technical standards development organisations relating to the Internet, and these discussions record the development of key Internet standards – including the latest versions of the web protocols, security standards, and widely used telephony, video conferencing, and video streaming platforms – to understand the social interactions and dynamics of the standards-setting process.

A clique of geeks?

Perhaps unsurprisingly, our results show that the IETF, similarly to other large organisations, is dominated by a relatively small group of highly active participants.

Looking at the email interactions, we see that most participants in the IETF engage with relatively few others (interacting with less than 15 others over a five year period). However, there’s a core group, comprising 5-10% of the total participants, that are much more highly engaged, each communicating with >40 others in the same timeframe (and a smaller core still, interacting with hundreds of others).

This core of highly active people holds the organisation together. Looking at the patterns of communication, they form the connections between different parts of the organisation. Removing the top 20% most connected people reduces the size of the connected community by around 90%. The IETF, and the Internet standards development process, has historically been strongly dependent on a small number of highly social participants.

But this effect is decreasing over time. In the early 2000s, removing the top 5% of most connected participants would reduce the size of connected community by more than half, whereas it would take the removal of the top 15% of participants to have the same effect now. The IETF community has become more cohesive and resilient over time, and – while it is perhaps still worryingly centralised – now relies less on a small core of influential people holding the organisation together than it used to.

How broad is influence?

We find that the top 10% most active participants account for almost half (43.75%) of the emails sent. They clearly dominate the conversation.

A question then is how broad is the influence of each such participant? Are they deep subject experts, each dominating the discussion in a specific narrow area, or do these active participants have broad influence across the organisation?

The plot below show the average number of areas within the IETF in which participants are active, based on email data, ordered by their relative influence: 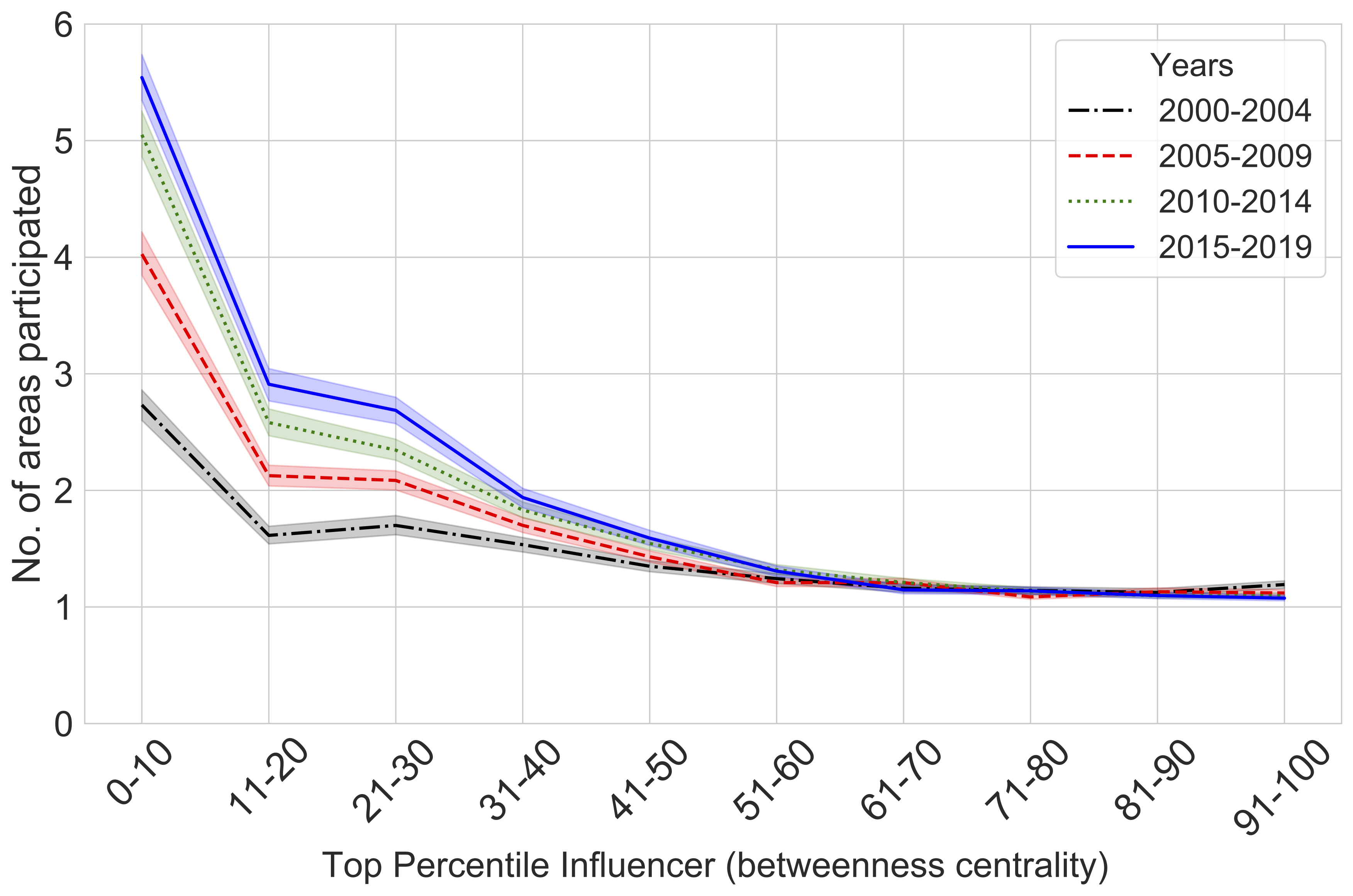 We also see a general trend of increasingly broad participation over time. The most active participants are engaged in almost twice as many areas in now than they were in the early 2000s. Equally, though, the less active participants are *also* engaged in more areas of the IETF. This perhaps suggests a general maturing of the community and a move from subject matter experts to generalists in the standards community – and perhaps a shift towards professional standards setters – but maybe also a shift towards a community with broader expertise.

The email discussion in the standards development community is dominated by a relatively small group of highly active people, but do such people write standards documents or merely talk about them?

The figure below shows the distribution of the proportion of documents authored by IETF participants, sorted by their activity on the mailing lists: 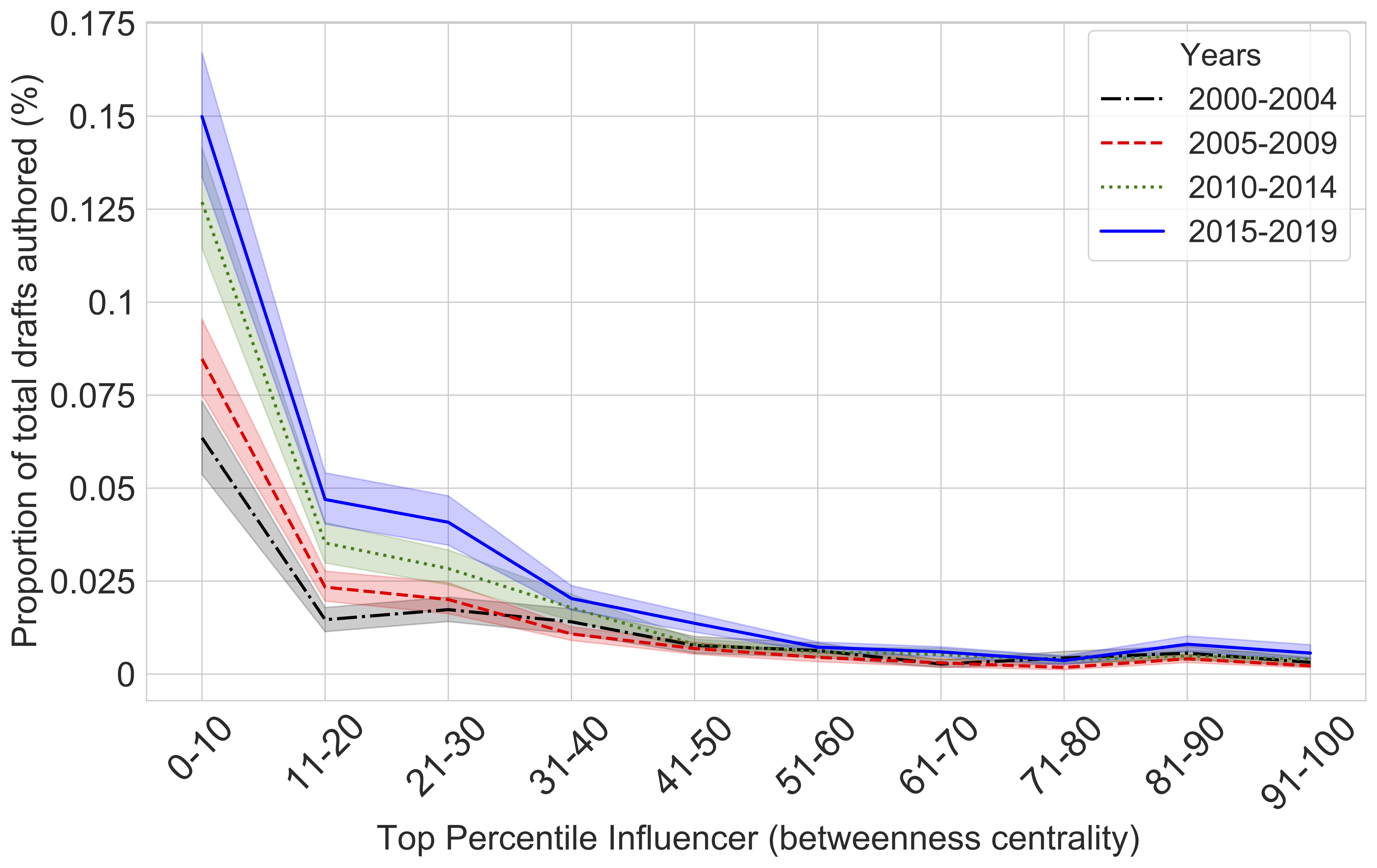 Secondly, a growing proportion of the community is involved in writing standards. The fraction of documents submitted by the top 10% of active participants has increased, but so too has that submitted by the remainder of the top 50%. The active participants are consolidating their influence, but the breadth of the community authoring standards documents has increased.

Who becomes a working group chair? 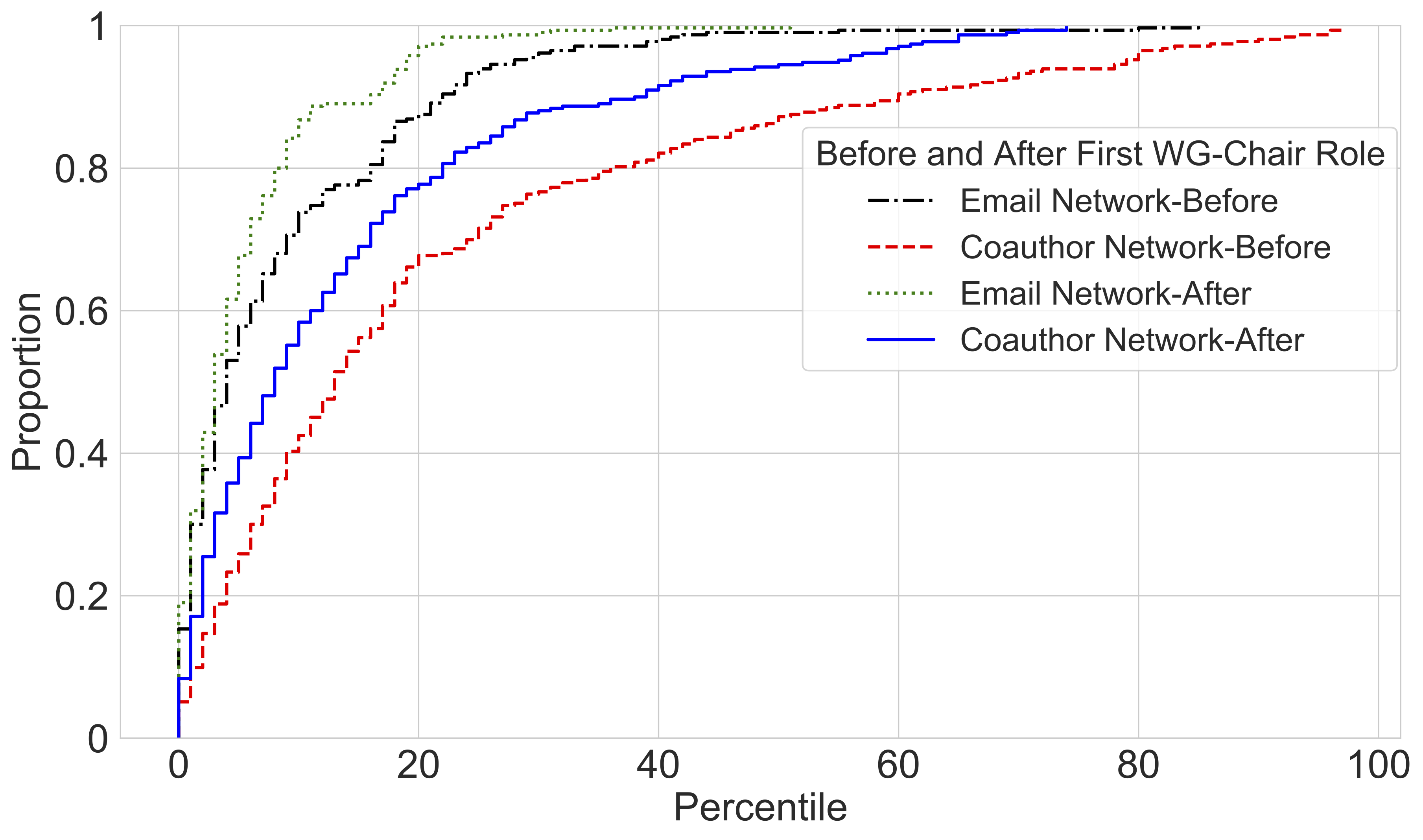 The figure above shows that this is indeed the case: almost 99% of working group chairs are in the top 20% of mailing list influencers, and two thirds are in the top 20% of document authors in the year before they became chairs. This also shows the impact of taking up a leadership role: influence in both the mailing list and authorship communities grows in the year after participants become a WG chair for the first time.

While participants in the IETF contribute as individuals, they are usually affiliated with an organisation. The figure below shows the ten most common affiliations of the top 20% authors, and the number of authors affiliated with each organisations: 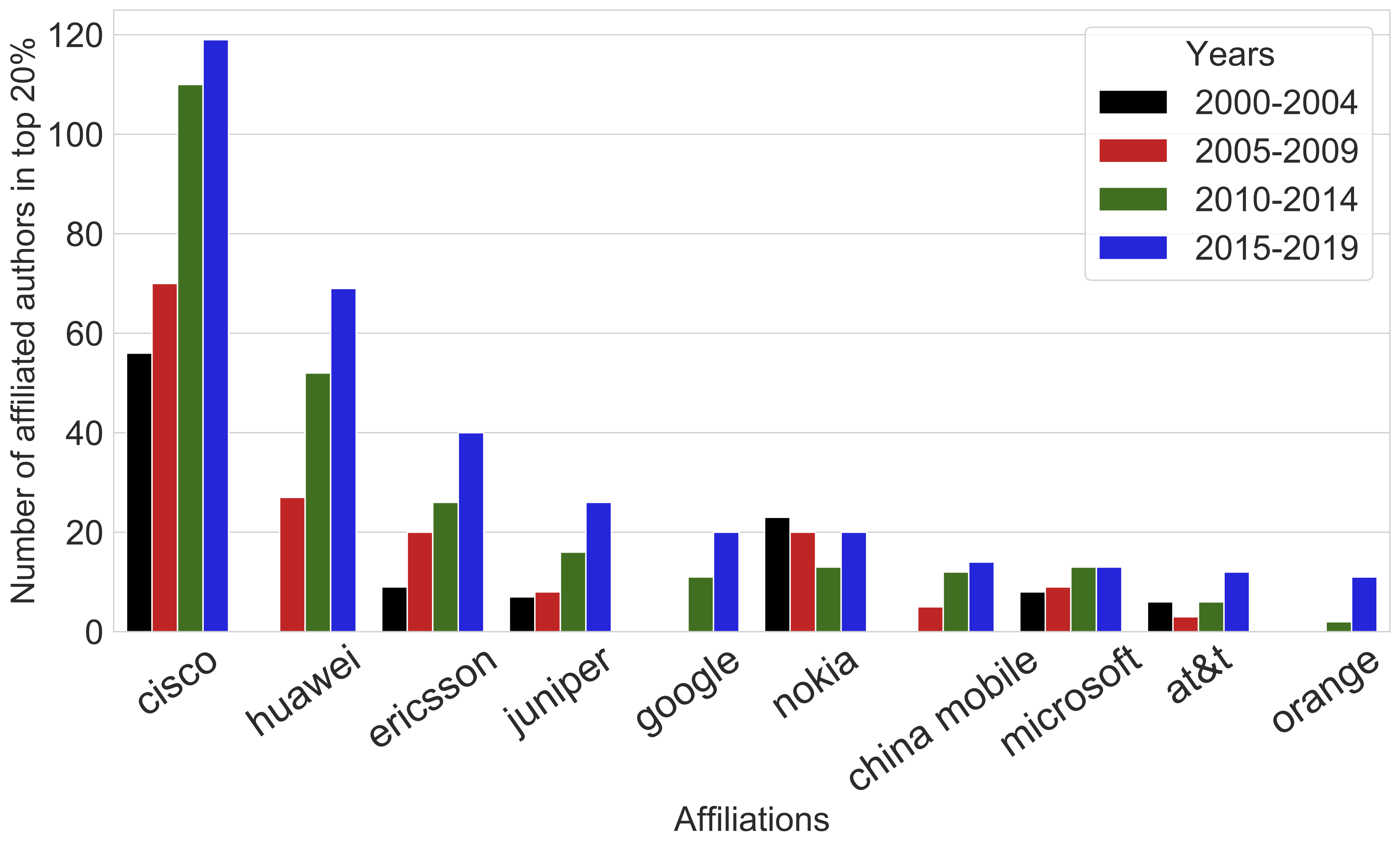 While the dominance of Cisco is clear, other organisations, such as Huawei, have gained prominence over time. In general, a small number of organisations employ a significant fraction of the influential participants in the standards process. If we look at the period 2015-2019, for example, out of the 915 authors ranked in the top 20% of most influential authors, 342 belong to the ten most frequently affiliated organisations, and nearly 253 are from Cisco, Huawei, Ericsson, or Juniper alone. 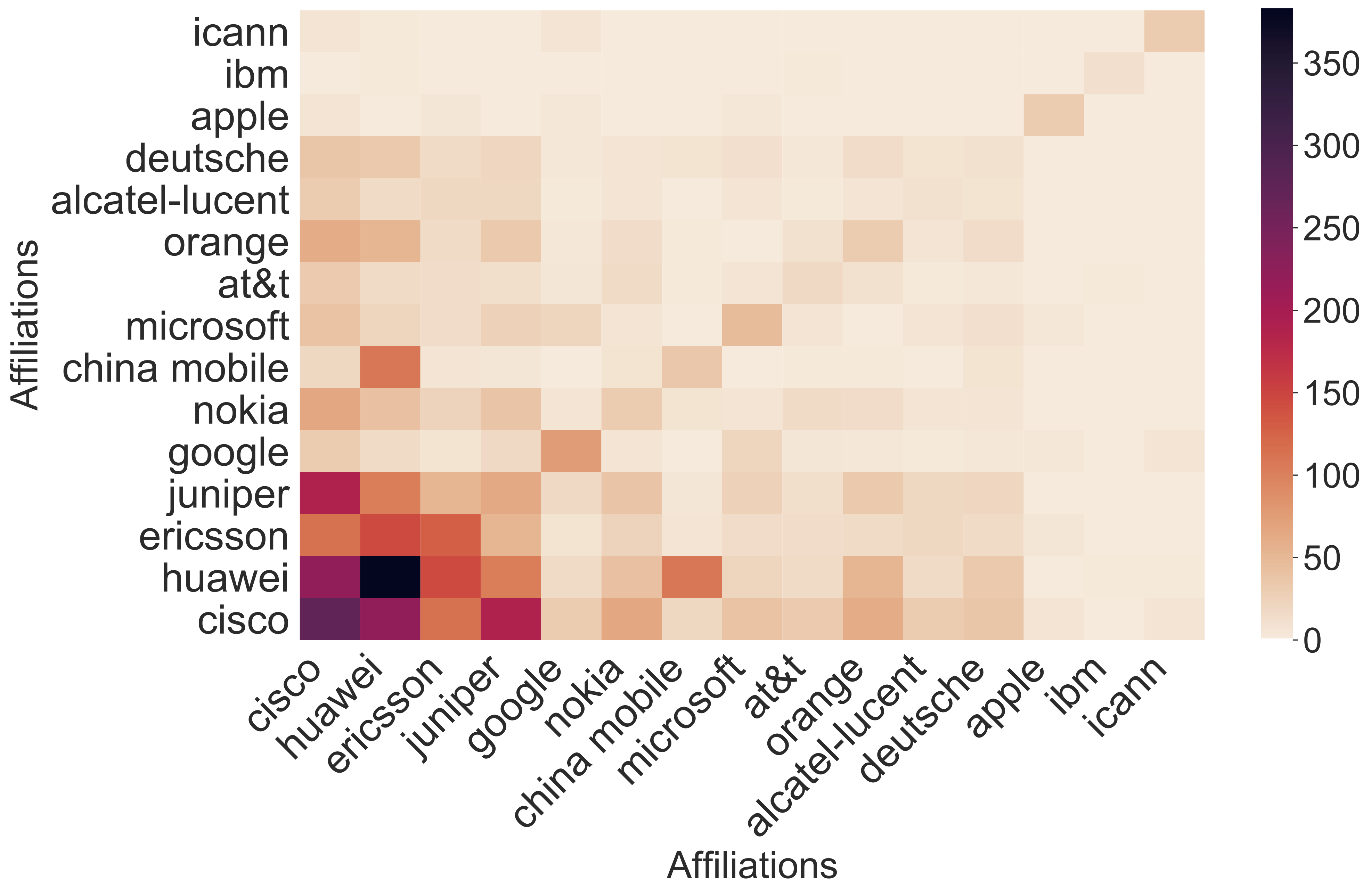 The recent addition of Huawei to the U.S. Entity List (of Industry and Security 2019) did not appear to have an immediate effect on such collaboration, as these trends also hold for 2020-2021.

Perhaps unsurprisingly, the Internet standards process has largely been driven by a small group of highly active participants who are often, although not always, affiliated with large technology companies.